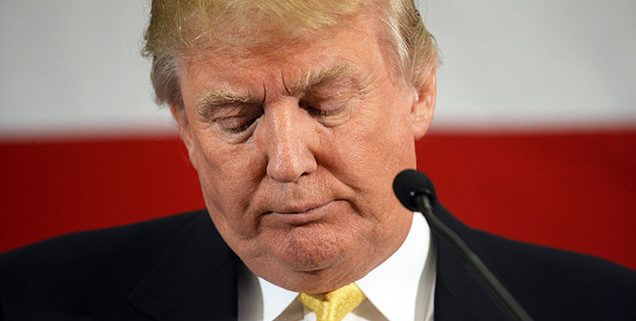 Every morning I wake up with this question on my lips. What did he do now? That’s the kind of confidence our erstwhile President brings out in me. He was going to deport the bad guys – criminals, murderers, rapists, drug dealers. Instead he’s deported a wife and mother who had been living in America for two decades. What was her crime? Raising her family? Working and paying taxes? Now he’s deported a young man, one of the dreamers, who has spent virtually his whole life here. And what was his crime?

His Obamacare repeal and replace would save 800 billion dollars that he needs for his tax cuts while it would eliminate twenty-four million people’s health insurance. Many of these unfortunates voted for him. He promised not to get the U.S. Involved in foreign wars. First, he approved a raid in Yemen in which a special forces officer and father of three children was killed. Then he bombed a Syrian airfield. Never mind that the airfield was fully operational less than 24 hrs later. He still claimed a great victory. For what, exactly? To piss off the Russians?  Deepen our involvement in the Syrian debacle? Of course, the neocons in government and the military loved it. This is part of the globalist agenda, the NWO at its finest. America as the military arm, the enforcer of the globalist agenda.This is not an America First foreign policy by any means.

In this, and many other areas, Trump has shown his true stripes. He is not in opposition to deep state. Rather, he is a vassal of deep state. He is not going to overthrow the NWO in America or anywhere else. Instead he is going to further its reach and consolidate its stranglehold on this country.

It’s time we all gave up the illusion that a new President is going to change things. All presidents are puppets who dance to the tune of their controllers. The one exception was JFK and look what they did to him.The political parties are two arms of the same rapacious beast. Politics just divide us. And anything that divides us makes it easier to control us.

Many people I know held out hope that Trump would bring real change. So they bit their tongue and voted for him. I didn’t. I never drank the Trump koolaid. Neither he nor Clinton were the answer. It was a damnable choice between deplorable and despicable.

They weren’t the answer. Do you know who the real answer is? YOU. Not either political party or its nominees.

Because the only thing that will bring real change to this country and this world is the power inside us. We have an innate creativity that those who control us do not. We have a soul that is a door to the infinite. When we open that door we are capable of bringing down the energies that change the world. Our controllers fear that more than anything and have gone to great lengths to keep us from activating our true spirituality.

Sri Aurobindo, a great Indian spiritual master, said this about changing the world:

“The illusion of action is one of the greatest illusions in human nature. Men have a feeling that if they are not all the time running about and bursting into fits of feverish activity, they are doing nothing. Whatever has been done in the world has been done by the very few who can stand outside the action in silence; for it is they who are the instruments of the Divine Power. They are dynamic agents, conscious instruments; they bring down the forces that change the world. Things can be done in that way, not by a restless activity. In peace, in silence and in quietness the world was built; and each time that something is to be truly built, it is in peace and silence and quietness that it must be done…Enter into the consciousness of Eternity, then only you will know what true action is.”

Instead of getting hooked on the Trump reality show, meditate and pray by yourself or with a group of like minded people. Focus on bringing down the energies that change the world. If enough of us do that, we will change the world and the PTB won’t be able to stop it. If you want to build a safer world for your children and family, meditate and pray. Meditation is far more powerful than complaining. Complaining and getting angry keep you stuck in powerlessness and locked into the lower aspects of your nature.

Powerlessness is an illusion. There is a power inside you more powerful than any negative force on this planet.

To support the kind of change needed on this planet I have written a novel, THE SILENT STEPS OF GRACE. It’s a powerful and captivating story. It will move you. It is also a guide to dealing with the difficult challenges that come with every life. It will help, inspire, and sustain you in the times to come. THE SILENT STEPS OF GRACE is an amazon #1 International Bestseller.

I have also created two CD’s Harmony & Balance, and Vitality that will energize you and help heal and balance you. These CD’s are unique. Listen to the original music created especially for these CD’s by Hollywood composer Lindsey Gillis. Feel my healing energies. They have been recorded on these CD’s. I know of no other product that contains powerful and pure energies like these.

You can buy both CD’s for the price of one until May 5th. I doubt I will make this offer again so take advantage of this 2 for 1 sale now.

No matter what life may bring, aspire upwards.

THE NEXT DIMENSION Tues. Nov. 8, 8 pm est
Scroll to top